Every few days, furniture and artwork would have to be moved to another room so fans could dry the newly impacted area. In the end, only one room in the home was left undamaged.

Had Sondra Bloch not been barefoot when she stepped into her walk-in closet, she wouldn’t have noticed that the carpet was wet beneath her feet. So, she wouldn’t have checked if the wall behind her clothes was also wet or investigated her son’s adjacent bedroom to discover the same problem.

Sondra called PURE and a water remediation company soon arrived at her home. The company set up large fans to dry out the area, leaving Sondra and her husband, Michael, to believe that an isolated incident was under control.

It had been a cold winter in Massachusetts and snow had built up on the roof of the Blochs’ home. When temperatures rose, the melting snow refroze into ice dams, which allowed pooled water to seep under the roof shingles and into their home.

As it continued to snow over the next several weeks, additional ice dams formed. “It was taking over the whole house,” Sondra said. “It was like a domino effect. It started with the roof and came down all three floors to the finished basement.”

Every few days, the Blochs’ furniture and artwork would have to be moved to another room so fans could dry the newly impacted area. “Everything was wrapped in plastic,” Sondra said. “It was like a hazmat scene.” 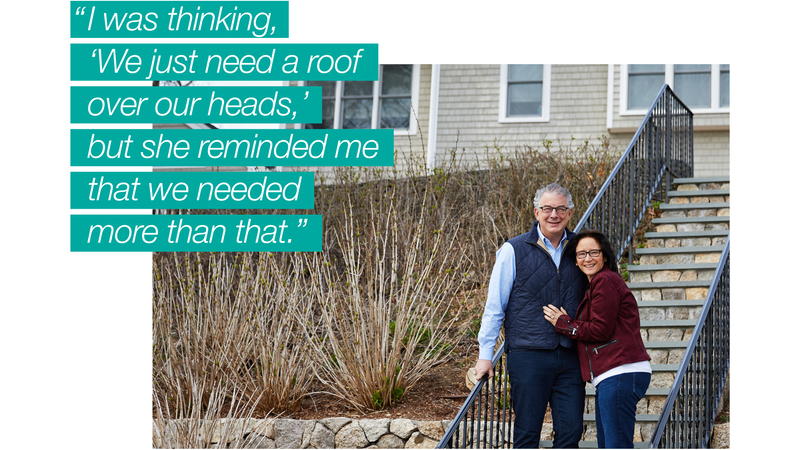 In the end, only one room in the Blochs’ home was left undamaged.

“Our Member Advocate was a better advocate for my family than I was at the time,” Sondra said. “I was thinking, ‘We just need a roof over our heads,’ but she reminded me that we needed more than that. It made me feel like PURE was on our side and we were truly taken care of.”

When they bought their second home, a beach house in Cape Cod, Sondra said they paid extra attention to its roof and have been highly attuned to the risk of ice dams each winter since. “Every time it snows, my neighbors have someone come to plow their driveways,” she said. “I have someone come to rake the snow off the roof.”