ACE Ltd. Chairman, President and CEO Evan Greenberg said in late 2014 that the $365 million acquisition of the U.S. high-net-worth personal lines business of Fireman's Fund Insurance Co. served to "reinforce and advance" his company's position in an area of strategic growth.

Its recent agreement to acquire Chubb Corp. should take the business to a whole new level, but some of the press coverage in the wake of the July 1 deal announcement focused on competitive concerns among brokers and consumers in a market niche traditionally controlled by a handful of carriers.

The high-net-worth personal lines market has "a whole plethora of players," Greenberg said during a July 1 conference call, according to a transcript of his remarks. He listed the participants in the market, which typically includes coverage for homes, vehicles, yachts, collections and umbrella liability for policyholders with often sophisticated needs, as including ACE, Chubb and American International Group Inc. as well as the likes of personal lines powerhouses Allstate Corp. and State Farm Mutual Automobile Insurance Co. Privilege Underwriters Reciprocal Exchange, or PURE, has brought a unique business model to the sector since its January 2007 launch, and Ironshore Inc. has touted its presence in the market on an excess-and-surplus lines basis in several states.

ACE effectively entered the high-net-worth personal lines market through a 2008 acquisition of substantially all the assets associated with a group led by Atlantic Mutual Insurance Co.

All told, Greenberg said the combined ACE and Chubb would have about $5 billion in combined premium volume in the high-net-worth personal lines business on a pro forma basis. But that business comes in the context of a market that he said ACE has sized at $40 billion or more, leaving what Greenberg described as a "tremendous growth opportunity."

Upon announcing the Fireman's Fund deal, ACE Private Risk Services touted the "powerful combination" of the two organizations in print advertisements in saying that it would take high-net-worth insurance "to new heights." In Chubb, ACE will add the company that lays claim to having created the market more than three decades ago.

Replicating ACE's effort to size the market would be a difficult task, given where and how the high-net-worth business tends to be written and reported. In addition to homeowners and private-passenger auto insurance, high-net-worth programs often include material amounts of premium related to personal umbrella and excess coverages. As part of its inclusion in what is classified in statutory filings as the other liability line, the business may be comingled with unrelated commercial programs. The same is true for personal valuables coverage that has been classified in certain state product filings as being associated with the inland marine line. Additionally, Fireman's Fund's high-net-worth business included dwelling fire coverage, and the AIG Private Client Group markets a range of policies that includes private aviation insurance and workers' compensation for domestic staff. 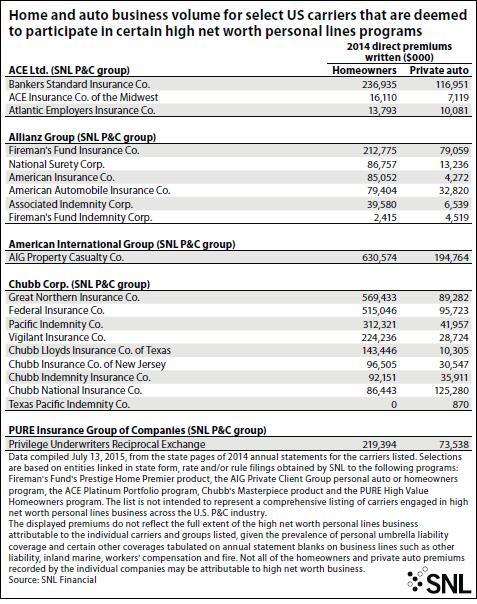 Since the Fireman's Fund transaction involves the acquisition of renewal rights to the seller's high-net-worth personal lines business rather than a distinct legal entity, SNL has not consolidated the historical results associated with those operations into the ACE U.S. P&C group as it would normally do following a whole-company transaction. A notice of nonrenewal of insurance filed by Fireman's Fund and/or its affiliates with various state regulators, including the Louisiana Department of Insurance, contained a copy of a letter informing existing policyholders that ACE had agreed to make offers of coverage to "most" Fireman's Fund policyholders. The filing further disclosed that ACE Insurance Co. of the Midwest would offer coverage to "at least 90% of the existing policyholders at the time of non-renewal."

Greenberg, in a brief discussion of the Fireman's Fund transaction during a January conference call, said approximately 80% of the book consisted ofhomeowners, collections and valuables, and umbrella liability. He also noted that the seller's statutory filings "don't readily upon reading them reflect the profitability of the business," given the aforementioned nuances of reporting for coverages such as personal umbrella.

All six of those companies have been linked to Fireman's Fund's Prestige Home Premier product in various state product filings. While annual statement blanks do not offer further granularity regarding the specific programs to which premiums pertain, the six companies combined to generate direct premiums written of $506 million in the homeowners line and $140.4 million in the private auto lines.

A track record of growth

As of the date of its most recent quarterly statement, PURE had obtained licenses to operate in every state except Idaho. The exchange launched operations in California during the second half of 2014, and its Golden State premium volume approached $2.4 million during the first quarter of 2015.

PURE seized upon news of ACE's deal with Fireman's Fund in December 2014 by launching the SwitchOrBeSwitched.com microsite.

"If you're a Fireman's Fund policyholder, the right to renew your personal insurance is about to be sold," a marketing flyer posted on the PURE website states. "So there's no better time for you and all owners of high value homes to explore your options, including PURE. While Fireman's Fund is being paid to part with its policyholders, we actually pay our members who choose to leave PURE [through the collection of the balance of their subscriber's savings account] and yet have achieved a remarkable 96% member retention rate."

PURE ‎Senior Vice President and Chief Marketing Officer Mark Galante told SNL in reference to ACE's agreement to buy Chubb that "we like this deal because it's bringing increased interest" to the high-net-worth personal lines segment. But, he added, PURE is trying to keep the blockbuster transaction from distracting it. "If we keep our heads down and maintain our focus, more good things will happen," he said.

He noted that there long has been a debate about the size of the high-net-worth personal lines market; he personally put it at somewhere on the order of $20 billion to $25 billion. But, Galante added, "Whether its $10 billion or $40 billion-plus, it's long been an oligopoly." In either case, he sees "significant headroom for growth" for PURE. The June 18 announcement of the recapitalization of Privilege Underwriters Inc., the holding company for PURE's attorney in fact, could further the group's opportunities for expansion. Stone Point Capital LLC, which teamed with members of management to form PURE, joined Kohlberg Kravis Roberts & Co. LP and management to make equity investments in the holding company. Terms of the transaction were not released. Galante predicted that the ability to collaborate with "two such amazing firms" would set the stage for PURE and its partners to "do great things together."

As it turns out, they will do so at a time in which the high-net-worth market finds itself in an arguably unprecedented state of transition.